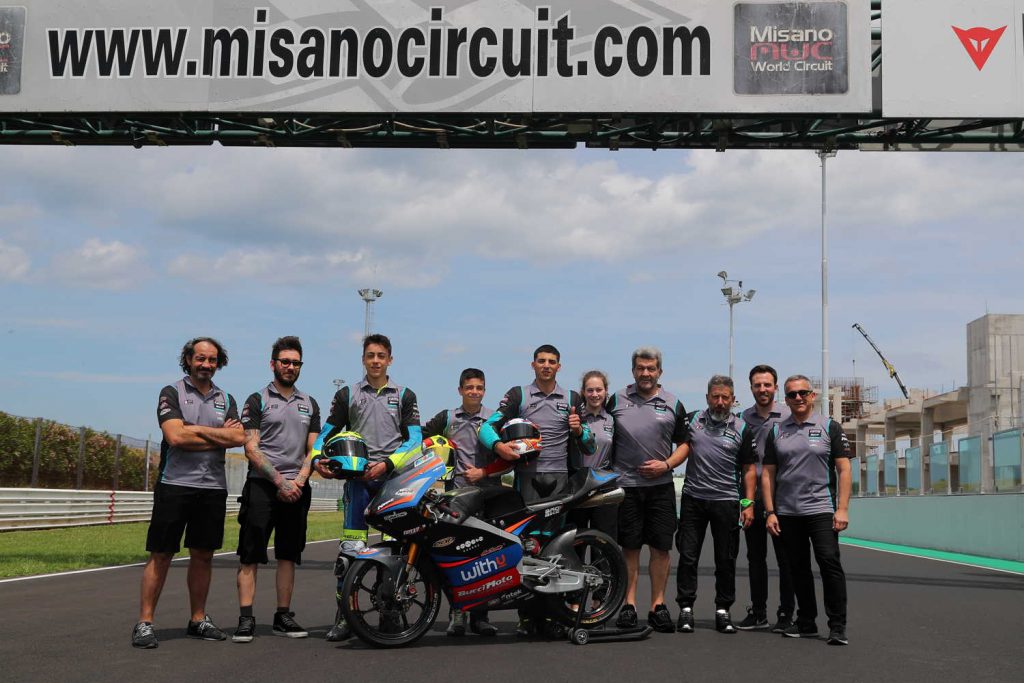 At the end of a very long time of break from track, due to evolution of the Covid-19 pandemic, Bucci Moto finally could come back at Misano World Circuit for the first preseason test with the full formation, in one of the tracks which will see the emilian company committed in 2020.

A break from tracks which wasn’t the same in the factory and planning, with Bucci Moto that during the winter and the early spring developped the new model of the BR17GP3, which will lodge the Yamaha YZF450 engine the Italian Federation choose as engine for the new Moto3 category which will debut this year in the Italian Championship and in which Bucci Moto will start two riders.

A bike built from zero, around the Yamaha engine, with the datas of the old BR17GP3 and the experience of Claudio Bucci, who brang to life the new bike, which as said will debut in the 450 Moto3 of the Italian Speed Championship and will be also on track in its 250 version in Premoto3, with Bucci Moto which double the committment from last year, consolidating itself inside the highest national competition.

A consolidation that came from the project, from the bike and also from the riorganization of the staff, completely revised from last year, with the hiring of Emanuele Ricci – who won the 2019 Italian Moto3 Championship in the same role – as sporting director and riders’ coordinator, bringing his experience to the very young Bucci Moto riders.

Riders who will be 3 in total, with two 450 Moto3 given to the confirmed, and promoted, Matteo Morri and to the new entry Francesco Mongiardo, who will start his second year in the CIV Moto3 class. The premoto3 by its side will see the winner of the 12 Inches Italian Cup Bucci Moto Challenge, Samuele Santi, who will make his debut in the Italian Championship.

The season’s program sees the partecipation as said to the Italian Speed Championship, revised in its calendar due to the situation, with the number of the races reduced to 4, but as well it will see the riders racing, starting from the first round on 5th July, in all the best four national circuits, together with the Tuscany track, of Misano, Imola and the great finale at Vallelunga.

New project, new bike, important partners and very young riders, to confirm how Bucci Moto believes in the green line and in the growth of young riders, building them a project from the low wheels to, from now, the Moto3 class, the best expression of prototypes in the national championship.

Talking about the partners, the important collaboration for Bucci Moto sees the designer ‘Alex Design’, Official Painter for the group “Petronas Sepang Racing Team”, who created the image of all the racing squad, from the bike’s livery to the team’s uniform, as well as all the vehicles the team will use during the season. A project created in direct partnership with the Team “Withu Motorsport”, which will cooperate with Bucci Moto, for a future with lot of emotions and important target in the motorcycle world.

Team “WithU Motorsport” which is company leader at international level in the sector of telecommunication, fiber internet, gas and electricity, and official sponsor of  “Petronas Sepang Racing Team” and “Team VR46”, which decided to join the Bucci Moto3 project and to start this partnership the liveries of the team will be the same of the MotoE World Championship.

Thanking all the partners which contribute and which make this project possible, the wait now is only to see the BR17GP3 on their first official race in less than one month at Mugello.

Claudio Bucci: “I’m very satisfied to be able to present our new building, the BR17GP3 built around the Yamaha YZF450 engine to partecipate in the new Moto3 category of the Italian Speed Championship. We worked for a long time during this long preseason to be ready at our best with a project started from zero, joining the new category wanted by the FMI. We will be at the start with two very young riders, both of them will be 16 only during the season, and for us it’s reason of satisfaction to target with them our growth inside this championship. Matteo will be with us for his second year and we are happy to been able to confirm him, as well as we are happy to have Francesco, who will debut with us, he has a very good potential and we target the best, also with our revised staff with the important presence of Emanuele Ricci, who will bring us his committment and know how inside our team. We confirm also the start in the Premoto3 class with Samuele Santi, winner of the Bucci Moto Challenge last year, who will debut in the CIV, a reason to be proud for all the Bucci Moto, completing an important project. I want to thank all the partners which support us, starting from Team “WithU Motosport”, Alex Design, Essence, Ognibene spa, PBR Sprocket srl, Domino srl, KBike srl, AG sas, DM Telai srl, VP Italy srl, Airoh Helmets, Tecnostampi snc, GCG srl, R4Racing, VRP Engineering srl, Ferrari Cav. Bruno and we can’t wait to be on track at Mugello!”

Matteo Ballarin (president of Team “WithU Motorsport”): “We decided to join the new Bucci Moto3 project, which will debut this year in the Italian Speed Championship. With Alex Mazzocchetti, owner of the brand “Alex Desing” we created a partnership project bewtwween Bucci Moto Team and our team. In fact, to start this partnership, the liveries of the bikes which will ride in the CIV will have the same image and design of the bikes that will go on track in the World MotoE Championship and we are confident about reaching important targets together, having solide bases in 2020 with an eye on the future”.