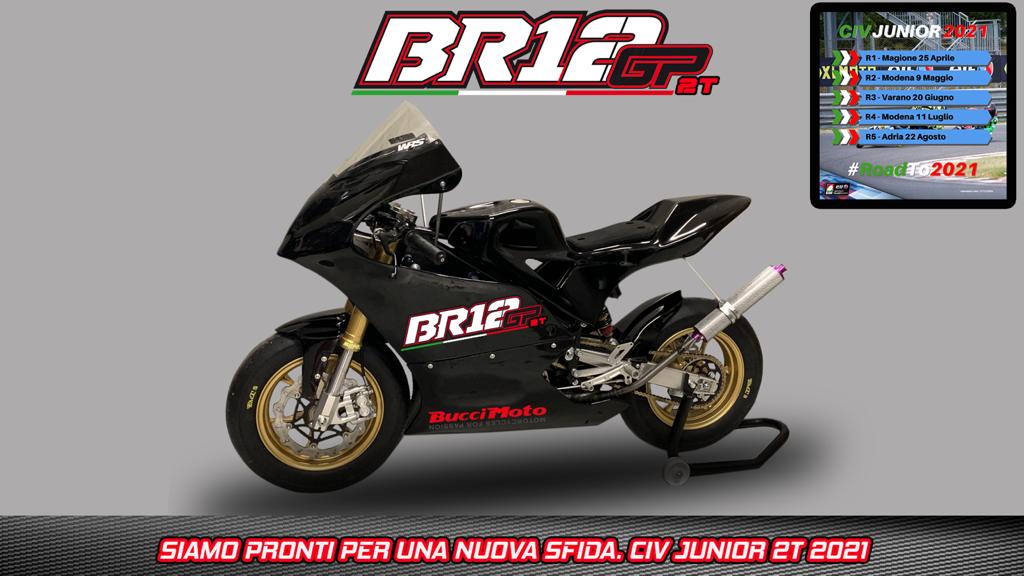 Preparation time for the agonistic season 2021 that for Bucci Moto will see an important news, in the direction to go on with the politics adopted by the company from Felino, which believes in the growth of the young riders and have the target to put them in the condition to express themselves at the best with every kind of bike, everyone adapted to the necessities and possibilites of each rider.

In fact, from the expert and qualified hands of Claudio Bucci, the BR12GP2t has born, a bike thought and projected for the very youngs who wish to participate at the Italian Junior Championship in the MiniGP 50 class, considered one of the most preparatory classes for the riders to the step, then, to the high wheels, with the Premoto3 and then the Moto3.

All bikes – and categories – in which Bucci Moto takes part, having gave birth to an important production chain for the youngs, which starts from the low wheels, with the possibility to choose the 2 strokes, with the new born BR12GP2t, or go with the classic 4 strokes, with Bucci Moto which makes available the BR10GP and the BR12GP, both already winnwes in championships and tested at the best on the most italian tracks and not only.

Coming back to the new born in Bucci’s home, the BR12GP2t clearly got the important characters of the Br12GP 4 strokes, but it has been built based on the CS50 engine, the sole engine to use in the Italian Junior Championship, so the bike has been projected on the just said engine, going like this to have the best performance under every aspect. A new and important road so for Bucci Moto, who will participate in first person to the CIV Junior, at the moment with a small team, to be able to follow at the best their riders and guarantee a qualified assistance on track, with the team from the Felino company who will make his debut in the Junior competition of the CIV.

A debut which will make that Bucci moto will take part in all the categories for the young riders and not only, giving them the possibility to start a journey which starts from the youth championships, with the BR10 and BR12 4 strokes or with the BR12GP2t, to pass then to the high wheels, with Bucci Moto which will continue its path in the CIV with Premoto3 and Moto3, without forgetting the Moto4, category also interested and preparatory for the youngs.

With great satisfaction for the last born, which already gave interested datas, now the meeting is at the first season’s tests and to the next news which will be communicate from Bucci Moto looking forward the 2021.

Claudio Bucci: “I am very satisfied to have started this way and present the Br12GP2t, with which we will take part at the CIV Junior, making our debut in the youth national competition. From the experience we got thanks to the 4 strokes and our BR10 and BR12, we developed our new born, which takes the best things from our bikes and the experience we got, thanks to which we were able to build the bike for the sole engine CS of the CIV Junior. It’s a project which satisfy me and for which we worked hard, thanks to which now will be present in every preparatory class for the young riders, with the possibility, for who wants, to start a path that brings until the national Moto3. An ambitious project, but in which we belive and this other step shows how we are on the right way. We accepted this new challenge, we have interesting requests to makes part of our team and we want to do with the confidence to create an important production chain for the riders. Soon we will announce the other news for 2021 for our team and in the meantime we continue to work hard to be ready for nect season”